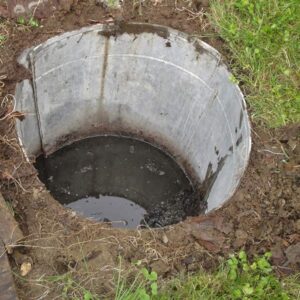 Here are the answers to that question and the effects of using a water softener with a septic system.

WQA has research reports by the University of Wisconsin and the National Sanitation Foundation on septic tanks and water softeners. This research was completed in the late 1970s. It was about that time that numerous regulatory agencies were contemplating restriction on the discharge of water softener wastes to private sewage disposal systems.

More recently the U.S. Environmental Protection Agency reviewed this research report, and an expert in on-site waste treatment wrote October 1993 that he “does not believe that the conclusions of the earlier study would change since the chemistry and physics of soils have not. “He also goes on to say that he knows this work to remain scientifically excellent“.

These studies conclusively show that water softener waste effluents cause no problems for septic tanks.

The allowance of water treatment system discharges to hundreds of thousands of septic tank systems is practically universal now. It has not caused damage or hazards but it has provided convenience and economic savings to many homeowners. This conclusion is supported by the Ten States’ “Recommended Standards for Individual Sewage Systems” The states have concluded that even in Montmorillinite clay soils, the disposal of brine wastes from water softening equipment does not have a significant effect upon the permeability of soils suitable for soil absorption systems.

The addition of sodium to a septic system by use of soft water actually has beneficial effects on the digestion of wastes by bacteria. the volume of waste from a water softener that is added to the septic tank is not of sufficient volume to cause any deleterious hydraulic load problems. In fact, they are lower in volume and rate of addition than wastes from automatic washers. The calcium and magnesium in softener regeneration wastes contribute to good air and water movement (improved soil percolation) through the septic system drainage field.

The University of Wisconsin and teh National Sanitation Foundation reports clearly indicate that when the sodium content from the softener regeneration cycle is discharged into the soil via a septic system along with other salts such as calcium, magnesium, and iron the result is an improvement in the soil’s percolation rather than a detriment.

A letter from Dr. Fred P Miller, Professor of Soil Science, Department of Agronomy, University of Maryland indicates this same conclusion. Dr Miller points out that when the septic system is receiving water only, containing a very low mineral content, and not receiving the mineral salts from the backwash cycle, this condition “might result in swelling and dispersion of clay and lowered hydraulic conductivity in the absorption field”.

Tere are other advantages that are directly related to the use of ion exchange softened water when the hardness minerals calcium and magnesium are removed by softening, The homeowner uses less soap — studies have indicated as much as 50 – 75% less. There are also less biodegradable products discharged into the system which relieves the loading on the system.

It is a known fact that many homeowners do not maintain a septic system properly, not pumping the system at proper intervals allows detergent solids, as well as other solids, to be carried over into the drainage area causing clogging. Also, by having soft or stain free water available the homeowner’s fabrics are cleaner and teh amount of water used can be reduced. This reduces the loading on the septic system a great deal.

Many people may be under the impression that water conditioning equipment regenerates quite frequently and puts a high loading of sodium salts in to the waste water. This , of course is not true, the average family of four people would require softener regeneration approximately four to five times a week.

The Water Quality Improvement Industry has earnestly sought to sort out the factual information on softener effluent. The septic tank study clearly indicates that there are no adverse effects when water conditioning effluent is discharged into properly installed private septic systems. There are a few additional reports that also explain further evidence of the hardness ions in a softener’s regeneration wastes causing less clogging and maintaining higher permeability than the regular septic tank effluent.

SEPTIC TANKS AND SOFTENING, TO SOFTEN? OR NOT TO SOFTEN?

Certainly Shakespeare didn’t have the problem of deciding whether or not to use a softener with his septic disposal system. However, with 20 million on-site household disposal systems, this question has been asked by many homeowner. Can softened water cause problems for consumers on a septic system? After targeted research, the answer is NO — soften with confidence.

On-site household sewage disposal system work simply. The main soil pipe from a home’s plumbing system empties into a concrete or steel tank buried a prescribed distance from the house and beneath the frost line. The  common single-compartment tank has a baffle near the inlet pipe which prevents the effluent from backing up, and reduces the turbulence of the incoming waste. Once the effluent enters the tank, the heavier solids sink to the bottom, while more buoyant substances rise to the surface. Various bacteria present in the effluent, as well as other organisms which have been introduced to the tank, digest the waste material and chemically change it. the bacterial action, working in the absence of oxygen, is referred to as an anaerobic process. Another vented system is operationally similar, but the decomposition is aerobic, i.e. requires air.

After the bacterial action occurs, relatively clear water is discharged through the outlet pipe of the tank, It flows to a distribution box, where is is diverted to the drainage field through perforated, loosely connected pipes. The loose joints and perforations permit seepage into the surrounding soil. To enhance the water dispersion, the pipes are generally laid in beds of gravel or loose rock.

This covers the disposal system side of the story. The other side concerns water before it gets to the tap, and features the water softening system.

A typical water softener uses a resinous material that attracts sodium ions. The ion exchange resin reacts with the influent water exchanging the sodium ions for the calcium and magnesium ions. Calcium and magnesium are naturally occurring minerals present in many water sources. The presence of these ions makes water “hard” exchanging the calcium and magnesium ions for sodium or potassium ions “softens” the water. During the regeneration cycle, the hardness ions are removed from the softener exchange resin, and discharged with the backwash and some excess regenerant salt (sodium chloride or potassium chloride) that is necessary to drive the regeneration reaction.

Faulty Assumptions: In the 1970s, a number of counties and states became concerned about the effects of the softened water on septic systems. Although the assumptions proved wrong, there were three primary reasons for what turned out to be unfounded concerns and false assumptions. It is commonly known that bacterial life forms are threatened if their surroundings have too much or too little salt. It was feared that the higher concentration of salt in the effluent or softened water would be harmful or fatal to the tank’s bacterial action.

The second concern was that the backwash flow rate during regeneration would introduce water faster than the tank could handle. This would force effluent out of the tank before the bacterial action could be completed. In other words, “unprocessed waste water” would be sent out into the drainage field.

Finally, it was feared that the salt brine produced by the softener would lower the drainage field’s ability to absorb water. This assumption came from agricultural studies on irrigation systems with high sodium content.

These were “common sense” arguments about a suspected problem, and weren’t verified facts resulting from scientific testing. As a result of these assumptions, legislation was passed in some areas preventing softened water from being used on a septic system. To address this situation, theWater Quality Association (WQA) sponsored research at the University of Wisconsin (Madison) and at the National Sanitation Foundation (NSF). These groups conducted comprehensive studies to confirm or reject these assumptions.

The opposite of the assumptions listed above were shown to be true as a result of scientific testing.

First, “the effect of softened water on bacteria was actually beneficial rather than detrimental”. The normal salt content found in “unsoftened, hard” effluent is less than ideal for bacterial growth. The addition of sodium to the system was found to bring the bacterial environment closer to the optimal range. Soft water was, in effect, “healthy” for the organisms.

Second, the volume of backwash during regeneration did not disrupt the time involved in bacterial processing of effluent, it was easily within the limits that the tank could handle.

It was noted that an automatic dishwasher would pose a greater threat on these grounds than would a water softener!

Concerns about salt and soil absorption rates were also dispelled. The increased sodium content in the tank’s discharge was shown to have no detrimental effect on the soil’s ability to absorb water in a normal drainage field. Interestingly, certain soil conditions benefitted from it. Additionally, when the softener’s calcium-rich regeneration backwash emptied into the septic system, the discharge could actually improve the soil’s percolation. (Gypsum, a high calcium mineral, has long been used to increase the porosity of clay soils.)

The conclusions drawn from these tests are that softened water is NOT harmful to a normally operating septic system or drainage field. Obviously, this is good news to anyone who has suffered through dingy dishes or clothes, or struggled with precipitate build-up in pipes due to hard water.

Homeowners can enjoy all the benefits of soft water without worrying that it will disrupt the efficiency of the household septic system. 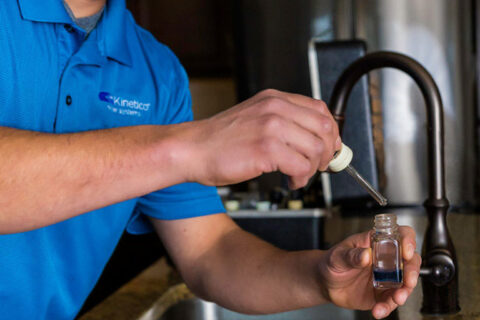 Life in the desert can be harsh. With average summer highs exceeding 100 degrees F in Tucson, Arizona, it’s vital to stay hydrated.… 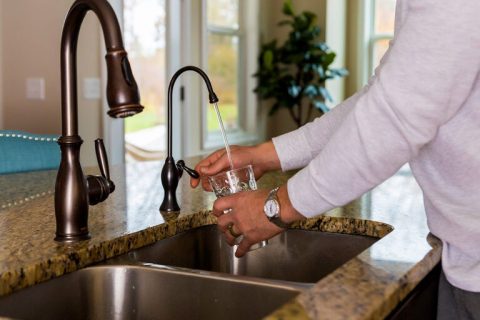 Fall is here, and temperatures have finally started to drop. At…

Call Now
Back to the top